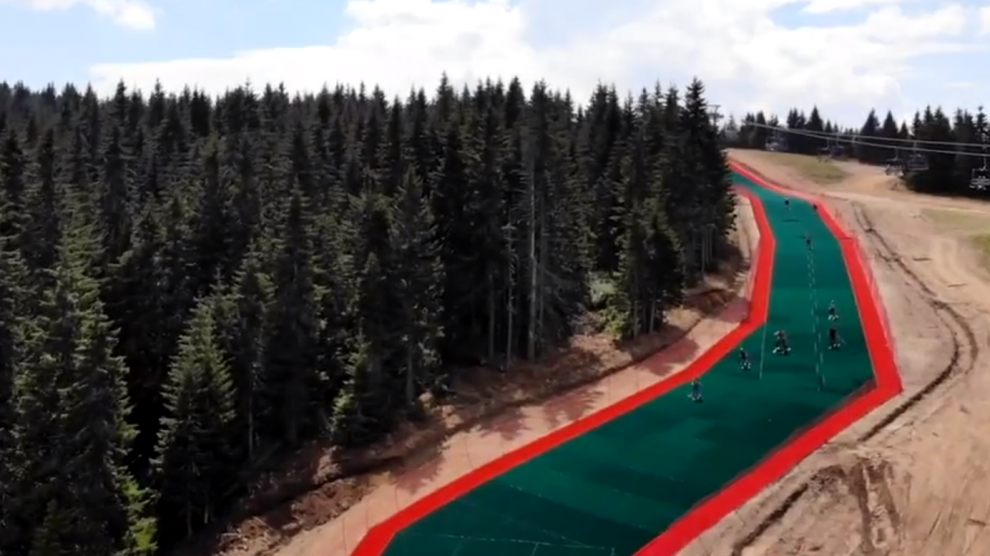 The end of the European ski season is nigh, with many resorts closing their winter operations after Easter. However for skiers and snowboarders in Serbia there’s no need to pack away their equipment, as the country’s largest resort, Kopaonik, has a new artificial ski slope that will remain open throughout the summer months.

Totalling 800m in length, with a vertical drop of 116m, the new slope is the largest of its kind in Europe. It has its own four-seater chairlift and runs straight down into the resort’s centre.

The piste is Neveplast, a product used on artificial slopes around the world made of synthetic bristles designed to resemble a similar surface to hardpack groomed snow.

“Neveplast was born with the intent to give everyone the possibility to ski year round, close to urban centers and at very low cost. Neveplast slopes in cities and on the mountain are considered gyms for skiers where novices can learn to ski and snowboard, enthusiasts can practice their preferred discipline, and where the competitive athlete can train exactly like they do on snow,” reads the Italian manufacturer’s website.

Recently the company was also behind the opening of a nordic ski track in Poland for year-round cross country ski training and a dry slope on the roof of a power plant in Copenhagen, which will open to the public this summer.

Kopaonik is located in south eastern Serbia close to the border with the Republic of Kosovo, in the mountain range of the same name. With 55km of slopes, supplied by 23 lifts, it’s the country’s largest ski resort. In winter Kopaonik’s ski area reaches the summit of the  Pančićev mountain at 2,017m from a base village at 1,057m.

By comparison, the UK’s longest indoor slope at Chill Factore in Manchester is 180m and made from real snow. There has been a rise of artificial and indoor slopes in recent years. Last summer, less than a year after opening the world’s biggest indoor ski resort in Harbin, China opened a year-round state-of-the-art dry ski slope in the city of Qingzhou.

While skiing in Serbia is nothing new its resorts are relatively unheard of compared to their European cousins in the likes of France, Austria, Switzerland and Italy.

Skiing in Eastern Europe is popular with British skiers and snowboarders looking for a budget-friendly alternative to skiing in the mainstream resorts of the Alps. Serbia’s neighbour Bulgaria, home to resorts such as Bansko and Borovets, is often cited as the cheapest ski destination in Europe.

While Kopaonik’s ski season usually runs from late November to the end of April, the new artificial slope now allows the resort to stay open 365 days a year.

Recently a number of ski resorts have made contingency plans to protect themselves against the changing environment and the threat climate change posies for the ski season and the local economy – many are taking steps to turn themselves into year-round destinations.

Tignes, one of Europe’s loftiest resorts, plans to build an indoor snow slope at 2,000m to preserve its snow sports industry and in Scotland, Cairngorm Mountain built a multi-million-pound artificial slope, which now remains to be the only functioning piste at the tragedy-stricken resort.

After a record-breaking winter for snow fall last year resorts such as Val Thorens and Courchevel, used a method known as snow farming, a process whereby sawdust and reflective tarpaulin is laid on top of the snow to preserve it, to ensure the winter season could start on time.